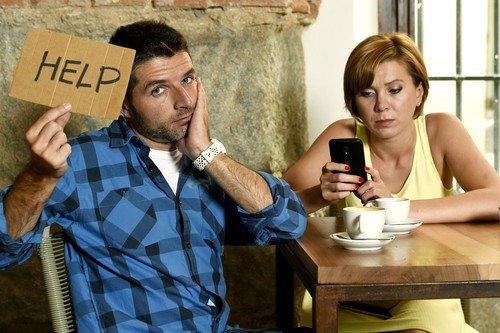 Too much time spent checking social media whilst on holiday could result in arguments and even complete relationship breakdowns for couples this summer, a new survey has revealed.

The online survey of over 1000 married individuals* was commissioned by London-based family law firm Brookman last month and revealed that whilst many expected their partner to take work calls or emails whilst on holiday, their biggest frustration came from their partner’s often constant use of social media.

It is estimated that the average Internet user is now on social media and messaging services for over 2 hours per day and the issue of being ‘physically present’, but ‘emotionally distant’ is a growing problem for couples. [1] In fact, technology addiction has been claimed to be as damaging as other addictions that have traditionally been considered as severely detrimental to a relationship, such as alcoholism and drug addictions [4]. More alarmingly, excessive use of social media is now being used as grounds for divorce.[2]

Brookman commissioned the survey to explore this area further after noticing a rise in the number of people who were including excessive use of technology in their divorce petition statements. Senior Partner, Henry Brookman, says, ‘Addiction to technology is a growing problem for couples, as people spend more time in ‘virtual relationships’ with friends, followers and even complete strangers.

Unfortunately, we are seeing a rise in the number of people who consider this problem to be a contributing factor to their marriage breakdown. Often, by the time they turn to us, the problem has spiralled into an irreconcilable state, and divorce has become the only feasible option’.

Obviously, if the problem is tackled early, then divorce doesn’t have to be the answer. Here are a few simple ways of reducing the use of technology so that your holiday is a dream and your relationship remains intact.

Leaving your phone or tablet behind when you go out –

Where possible, don’t take your phone with you when going out for day trips or even for just a short walk across the beach. You’ll not miss anything for a couple of hours and your partner will value the opportunity to talk and have your full attention. Take a camera with you for snapping those happy memories.

If you’ll want to take photos whilst on holiday, put your phone on Flight Mode for short periods so that you can use the usual phone functions, but without the risk of distraction from endless social media updates.

If you really do have to check social media, make sure you do so for only a minute or two and no more than twice a day (once in the morning and once in the evening). Most things don’t need an immediate reply, so don’t give yourself time to get caught up in unnecessary conversations whilst your partner is sat there waiting for you!