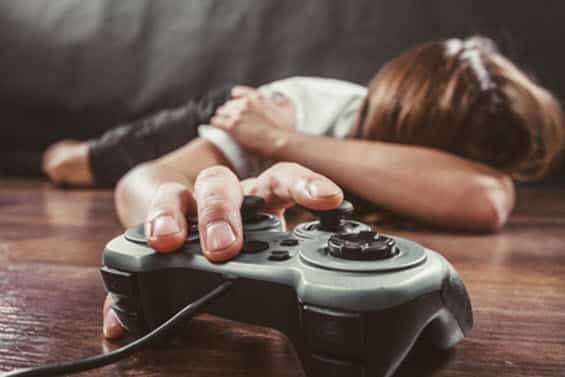 There are two organisations in the world who decide whether something is a psychological condition. One is the American Psychiatric Association which publishes the “Diagnostic and Statistical Manual” (the DSM), and the other is The World Health Organisation, which produces the “International Classification of Diseases” (the ICD). The World Health Organisation has announced that the next edition of ICD, due out in June, will contain “Excessive Video Gaming” as a mental disorder. The American Psychiatric Association will probably not be far behind. When they published the most recent edition of DSM, there was a section on the possibility of “Internet Gaming Disorder” as a psychological condition. The Association said that the potential condition was worthy of further study. That’s probably a code for “we think it’s a real condition, but we don’t have enough data yet”.

Researchers and clinicians are agreed; online activity is affecting our health. As yet, there are no specific disorders, such as “online dependent depression”, but they are probably on their way for an official classification. Already there is a condition called “Illness Anxiety Disorder”, and one of the diagnostic criteria of that is frequent searches for disease-related subjects on the Internet. What’s clear from a growing body of evidence is that the Internet does have an impact on our mental health.  Indeed, the UK Children’s commissioner recently said that social media is harmful to some children’s emotional development.

It is now evident that the Internet has a particular power over many people, leading to the potential for addiction and obsession. It can seemingly cause compulsive behaviour as well. And that’s before you even consider the possibility for people to become abusive and vindictive. When social media “trolls” are confronted by their victims and the impact their comments have had on them, they are mortified. Few online “trolls” appreciate the impact of their words. They are just lashing out “in the moment”, thinking they are just talking to a friend in private, not realising they are broadcasting to the world and upsetting a real person. Once they are aware of this, they are frequently repentant. It is an indication that online technology can affect everyone’s behaviour, turning nice, rational individuals, into abusive hate-mongers.

In the office, this means that you could well have individuals who are obsessed with specific online activities, eating into their productive time at work. There could be people who are more depressed, their mental health affected by being online. You could also have people in the office who become more compulsive online, leading to issues such as reputational damage. Accepting that your workforce is affected by the Internet and that it changes their behaviour, as well as their mental health, is essential for business owners these days. And if you are in a business of one, it is even more critical that you get to grips with this. The Internet could be affecting your entire performance and psychological state.

What to do about the Internet mental health issue

Once you have accepted that the Internet does affect the minds of your workforce, and yourself, it’s time to set up a plan as to what to do so you can minimise that impact. If you employ people, getting them to accept the issue is an excellent first step. Making people aware of the issues and encouraging them to discuss the way they use the Internet and how it affects them is a good place to start.

You might also have regular ideas sessions where people discuss ways they can achieve specific tasks without the Internet, reducing any dependence that your business has on it. For instance, studies show that “corporate memory” is disappearing. This is where knowledge is shared within the workforce, residing in their brains. When an issue arises, or a solution is needed a team with shared corporate memory can frequently come up with the answer based on their prior knowledge. However, these days people are not bothering to remember things in the first place because they think that whatever the problem, Google will come up with the answer. Except it doesn’t. Companies are losing hours and hours of productivity each week because of the decreasing size of “corporate memory”. Getting suggestions on how individuals can find alternatives to the Internet could, in this instance, help your business as well as improving the mental health of your employees by making them realise there are other things they can use, besides the Internet.

Maybe you or your Human Resources team need to re-write policies and procedures that take in to account the impact of the Internet on mental health. Perhaps you also need to think about support programmes for staff too.

One thing is for sure. The Internet is psychologically affecting your employees and yourself. It’s time to think what you are you going to do about that.