Is it worth working outside?

Doubtless, you have seen those “Internet Marketing” sales pages promising you the ability to work from the beach. Working outside, in the sun, does have its attractions of course. However, for most people work is still restricted to the office. 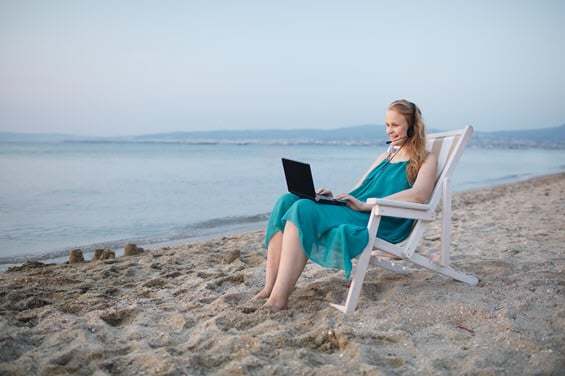 However, those Internet Marketers may be onto something. You might be better at your job if you do at least some of it in the open air.

In the past, this was easy for office workers. They could take a pen and paper outside and complete their tasks. But as soon as we all started depending on computers, we were almost umbilically attached to an office. Now, thanks to mobile technology, it is possible to release those ties and go back outside again to work.

Now, I’m not suggesting you completely abandon the office and freeze yourself, trying to work in the midst of a blizzard. But I am proposing that you make more of the outdoors, even if you have an office job.

There are plenty of reasons why this is a good idea.

The air in most offices is pretty dire. If it is air-conditioned, it is drier than usual, which affects your breathing. Much office air is also, inevitably, full of re-breathed air – every breath you take contains air that was previously inside someone else’s lungs. Not a pleasant thought. Office air, being relatively still, also makes the transmission of bacteria and viruses easier. Gosh, why would anyone want to work in an office?

Research conducted almost 20 years ago showed that when office air was ventilated well above the legal requirements, there were significant improvements in a range of factors. The participants in the study felt better when there was more ventilation. They also reported less dryness in their mouth. However, even though these subjective measures were useful to know, it was the objective analysis in this study that was revealing. For every step up in ventilation, work performance increased by almost 2%. Furthermore, there was a highly statistically significant increase in the ability of people to type. The findings are clear: the more fresh air you have, the better you can perform office work and keyboard tasks.

Another benefit of being outside was revealed in recent research on school children. The study looked at the impact of teaching children in the open air, compared with a classroom. They found that teaching children outside had significant learning improvements when compared with teaching the same children indoors, using the same teachers and the same lessons. The only difference was being outside. The effect also lasted beyond that lesson. When the children returned to the classroom, they were better in the subsequent lesson as well. Being outdoors appeared to have a long-lasting impact on learning. It turns out that we are more able to pay attention when we are outside than when we are indoors. Hence, working outside could help you avoid the distractions so widely present in offices. Even if you can’t work outside, going for a walk for a few minutes will also help.

We have a strong desire for the outside world. In a study of people who work in windowless offices, it was found that they are five times more likely to bring in a plant for their desk than people who have windows in the office. Workers in windowless offices are also much more likely to have pictures of nature on the walls than people who have the benefit of windows. It seems that if we cannot see the outside world, we want somehow to bring it into our office.

Perhaps this is one of the reasons why there is such a surge in interest in “garden offices” where homeworkers and those who do teleworking can get the best of both worlds – an office in the open air. Many companies are now designing their buildings with the outside world inside. The UK Met Office, for instance, has an indoor stream running through the reception area at its Exeter headquarters.  In California, the Cunningham Group of architects has a garden in the middle of their office.

Our interest in being outdoors is not just because we want to get away from the drudgery of office work. We realise it helps our mental health. According to the authors of “Making Healthy Places” contact with nature reduces stress in office workers. It also means speedier recovery from ill-health.

It’s time to go outside and be more mobile

The benefits of working outdoors are clear. They include improvements in overall health as well as reductions in stress and other mental health issues. For managers, though, there is an additional benefit above and beyond having stress-free workers. Being outside appears to improve attention and memory. It also makes us perform better, and we seem to be more capable of keyboard-related tasks. Working outside can boost productivity as well as helping workers think in a more focused way, thereby improving the quality of their work.

Thanks to lighter laptops, longer battery life and extensive wi-fi, working away from the confines of the office is now open to almost everyone. Being tied to the office desk is no longer necessary. These days many people do work “mobile”, but that is often in a café, on a train, or in an airport lounge. Most mobile working is still indoors.

Office productivity and quality of work will increase when more people work outside, instead of indoors. Working from the beach is not just a dream peddled by Internet Marketers, but is a reality that could give your business a real boost – and you as well.

Oh, by the way, the company just voted the “Number One Best Place to Work” in the USA is Forum Phi – and they hold meetings outdoors.