Will you follow Wetherspoon? Not any more – you can’t 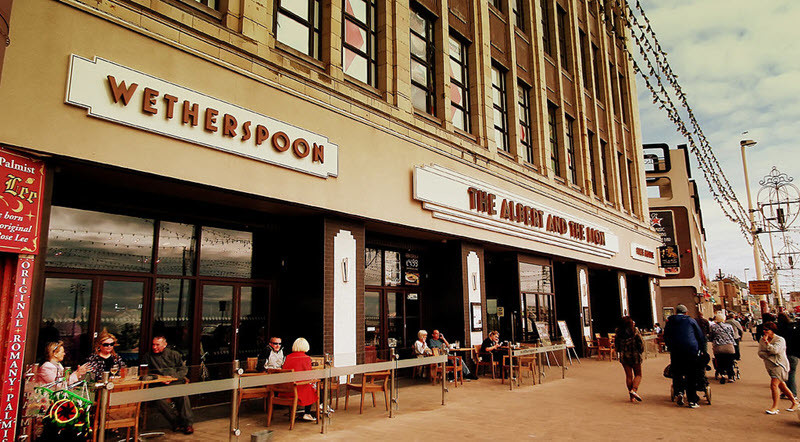 The pub chain, Wetherspoon, suddenly announced this morning that it was closing down all of its social media accounts. The company ceased all social media activity immediately citing bad publicity surrounding social media as its motive.

During the day, the pub chain’s share price rose by almost 1%. That might not sound much, but it has to be set against an average stock market fall of 1%. In other words, investors currently spooked by the impact of sanctions against Russian firms found the news from Wetherspoon quite positive. That implies that analysts quite like the stance taken by the company. In which case you can expect other firms could well be considering similar action.

These days you might think that a company which doesn’t get involved in social media is bonkers. After all, as you read this, millions of people are using Facebook. With 1.4bn active daily users, that more than 16,000 log-ins per second, assuming each user only visits the network once per day. As a company you’d be daft to ignore that volume of activity, wouldn’t you?

And over on Twitter, Wetherspoon had 44,000 followers. That’s not to be sniffed at, is it? After all, the average Twitter account has less than 1,000 followers and another British pub chain, Greene King – with more than three times the outlets of Wetherspoon – only has 14,200 followers. Wetherspoon is doing remarkably well on social media it would seem. So why give up?

Numbers can be deceptive

The fact that Wetherspoon has significant numbers of followers doesn’t really tell the whole story. With over 900 pubs, 44,000 followers on Twitter means only around 50 followers per pub. That means almost all of the people who use Wetherspoon’s establishments do not follow them on Twitter. Over at Facebook, the company only had 100,000 followers. Even that is a tiny number of the people using the pubs. Indeed, if the pub only had those 100,000 people as their customers each of them would have to be spending around £17,000 a year with them. Clearly, the social media following of Wetherspoon is a minority of its customers, in spite of the large numbers in social media terms.

What this means is that from a marketing perspective, the loss of social media activity for Wetherspoon will probably be imperceptible. In fact, it might boost profitability as fees paid to agencies will no longer be required and marketing staff will be able to spend time on activities that reach the majority of customers. Indeed, Professor Nick Lee from the University of Warwick Business School said today that “this could be a cost-cutting exercise dressed up as a social statement, hoping to capture what seems to be the mood of the times”.

Professor Lee added: “If this is a decision made by Wetherspoon in light of a detailed study of the return on investment in social media, which found that the time they spent on it was not justified by positive results, then I can only applaud them for being courageous enough to admit that, and hope that their move might inspire more companies to really address the return they get from social media investments.”

Social media under the business spotlight 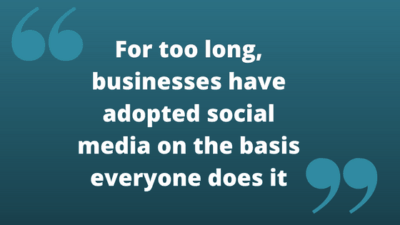 For too long, businesses have adopted social media on the basis “everyone does it”. That’s daft and without any strategic thinking. Yet it is commonplace. The issues surrounding Facebook in recent weeks have prompted many firms to start to take a serious look at social media. Indeed this may be the first proper consideration of social media for large numbers of companies who have been using social media merely lured by the “numbers game” of more followers than their competition. Only recently I posted a series of issues for businesses to consider following the Cambridge Analytica scandal.

One of those questions is about GDPR. With the legislation just five weeks away, I suspect that many companies will be nervous about the GDPR implications of their social media activities. For all we know, this may well have been a factor in the decision made today by Wetherspoon.

However, their public declaration of their intention to quit social media specifically mentions negative aspects of networks such as trolling. This is on the increase and companies do not want to be associated or linked with activities where such negativity is pervasive.

From a psychological perspective, reputation is linked to several factors, one of which is with whom you associate. People assess you based on the friends you keep. The same happens with businesses. The ascribed personalities we give them are based on the company they keep as well. Firms wishing to ensure they maintain a good reputation may well be thinking that social media with its inherent problems put them in an arena which is more of a threat to their company than the marketing opportunity it provides.

Plus, if you analyse the marketing opportunity of social media, it is nowhere as significant as many would have you believe. A simple analysis of the numbers shows for many companies it’s mostly irrelevant. One of the firms I have provided consultancy for has 7m website visitors, yet only 16,000 Twitter followers. It’s not significant for them – indeed I have asked them why they waste time and money on the social network. Their answer? “Well, our competition does it, so we have to.” I’ve told them that’s not much of an answer – indeed I’d expect more analysis from my first-year business students, let alone the board of a multi-million-pound market leader.

You can expect the Wetherspoon action today to have triggered discussions in many boardrooms already concerned by the revelations about Facebook. We may well be at the start of a tipping point for the business use of social media. Indeed, social media is plummeting into the “trough of disillusionment” in the Gartner Hype Cycle. Wetherspoon is just the beginning.

And what does that mean for your business? It suggests it is time to review, reconsider and seriously think about social media. Oh and one other thing – remember that most purchasing is still done in the “real world”, and most social networking is also “real world” as there is still more face-to-face activity amongst human beings than there is online activity. It’s just that there isn’t any kind of “like badge” to tell you the numbers. If there were, it would show how insignificant online social media really is.

2 thoughts on “Will you follow Wetherspoon? Not any more – you can’t”