Search engine users – that’s you and me, amongst millions of others – are being fooled. The likes of Google, Yahoo, Bing, AOL and others have helped us believe that search is fantastic, that it is productive and that it really helps us in ways that were not possible without the Internet. True, we can find information through search engines very easily – but at what price? 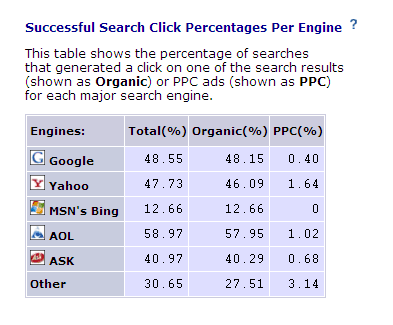 There is a psychological phenomenon known as “social acceptance theory”. If something becomes accepted wisdom by a large enough group of people, we all believe it because to do otherwise would mean falling out of line, being too different. Millions of people believe, avidly, that search has changed their lives. And they are right. Google and their competitors have revolutionised the way we get information making it faster, easier and more convenient than ever before.

But because we are so convinced by the positives, we ignore the negatives about search engines. What we don’t see – even though it is staring us in the face – is the abject failure of search engines to find what we want. Take one search as an example. I want to find a project manager based in Reading. So I pop off to Google and type in “project manager reading uk“. What do I get? A list of sites with job adverts – people who are advertising for a project manager’s job in reading. That’s not what I wanted. You might say I failed to give Google a detailed enough search term but equally it failed to interpret my keywords accurately enough.

This is a common problem. Indeed, most of the time Google fails to produce what we want. According to the latest figures from Keyword Discovery, only 48% of people click through to a search result having typed something into Google. You know as well as anyone else that often when you type in something to Google, you can see that the results presented were not what you were looking for, so you try another search phrase. With 52% of our searches failing to produce what we want, this means that more than half of your time on Google is completely unproductive.

Traditional wisdom has it that we go back to Google and type in a longer phrase, but the latest data on search phrase shows that we are actually reducing the number of words we type in – not increasing them. A year ago only 30% of our searches were a single word, now that’s risen to 46%. This suggests that we have given up trying to be specific with our searches because we know that what we get is still not what we want, so we may as well save a bit of time and only type in one word and still get a bunch of rubbish.

For instance, if I type in just “project manager” into Google, the first handful of results are not about jobs but about being a project manager and project management. Plus there are useful sites such as Wikipedia in the list which might help provide links to other sources of information in my hunt for a project manager in Reading. In other words, Google has been more accurate with the shorter keyword phrase than with the longer one; it has provided me with leads that could help, whereas the longer, seemingly more accurate phrase, led me in the wrong direction.

Worse than all this is the fact that 40% of searches we make are for stuff we have already previously searched for. In other words we are not actually “searching” but instead we are simply “re-finding” something – using Google rather like a telephone directory instead of a “sophisticated” search engine. Yet, the fact we use Google constantly throughout the day means we are so familiar with it we don’t see its faults. Combine that with the need to be seen to be part of the group – social acceptance – claiming that Google really helps, and you have a potent mixture for missing the obvious.

Google is wasting your time. This is especially true if you are in business. If you spend around an hour a day on Google, half that time is unproductive. Multiply that by 10 employees, say, and you’ve lost five hours of work a day – every day. Add to this the fact that because search marketing is seen as important, you now spend even more hours planning, analysing and working on pay per click campaigns for instance. All to produce adverts in a system that mostly fails to deliver what your potential audience actually wants and which we all spend unnecessary hours using.

Now it’s true that people can demonstrate increased business as a result of search marketing and it’s also true that with the right kind of good SEO you can show more traffic to websites via the search engines. But if I put a big yellow bucket on every street corner in town with copies of my ebooks in it, people would take them and I’d be able to “prove” that “yellow bucket marketing” is the way to go. In other words, you are bound to find that search marketing works because that is what you are doing. Do something else and that too will work. Just because search marketing succeeds does not mean that an alternative will not be better. There is a real possibility that people have become so hooked on search dues to familiarity and social acceptance theory that they are missing a better alternative.

And it looks like Google – as well as the other search companies – have also had their eyes closed to an alternative to search which is now biting them on the rear end. Asking people.

Before search engines were invented that’s what you did when you needed help, a solution to a problem, information or advice. You simply asked someone who you thought would know the answer or would know someone who would know. But along came search and we all fell into the trap of thinking it is marvellous. But now, as social network search facilities improve we are discovering in our millions that we can do what we are naturally inclined to do, and that is ask someone. So you can go on to Twitter or LinkedIn and ask people for an answer to your particular problem. Within moments you have an answer and often a link to the very site you need to go to.

People on social networking sites are more accurate than any algorithm fancy engineers can produce at working out what you really mean. You ask a question, say, on Twitter. You get several answers and useful links which you can then go to. No wasting time with useless searches, no wasting time with having to type in different words and no wasting time going to sites that didn’t fulfil their pay per click promise. Asking other people is what we prefer to do, it’s what works and it’s faster and therefore increases our productivity.

Search engines have their place. They certainly do help us and have enabled many businesses to thrive, including mine. Yet we might be missing the obvious because we are all facing in the wrong direction. Search may not be as great as we think it is. Social search may well be the future because it is the past.