Are people more likely to tell lies or be truthful online? 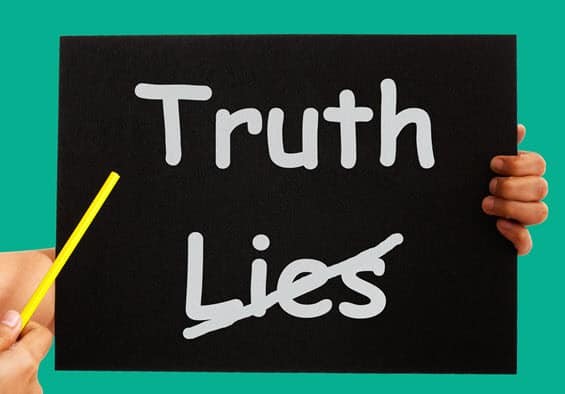 Everyone lies. Honest. Each of us will tell at least two lies per day. Generally, these are small lies of little consequence. We could be answering a question such as “do I look too fat in this top?” Answering honestly might not be a good idea in some instances….! Equally, your boss might ask “have you looked at those figures I sent you?” and you might respond, “yes, and I am going to send you an email about them later”. You then hurry back to your desk to quickly look at the figures you haven’t actually seen yet.

People lie all the time. They do it to avoid conflict or to protect themselves from ridicule or embarrassment. Most people lie at work and most do not feel guilty about it. However, when you tell fibs to your boss or colleagues they might know about it. You can give away the fact that you are lying with “tells” – these are small biological changes which result in facial alterations. You may recall the story of Pinocchio whose nose grew every time he lied. There is an element of truth to this. When you lie your blood vessels in your skin open up slightly. This makes your skin very slightly warmer and you feel that increase in temperature in your extremities. When you lie, your nose gets ever so slightly hotter and marginally thicker due to the increased blood supply. Someone who is telling a fib might provide a”tell” of scratching their nose or rubbing their face. They are subconsciously sensing the increased heat which is an irritant.

Another possible “tell” for the fact that someone is lying is increased breathing rate. A liar is more tense which leads to increased oxygen demands and so more breaths are taken. Lying also leads to shoulders being hunched due to the increased muscular tension. Poker players look for breathing rate and shoulder tension as potential give-aways as to when someone is bluffing. But they could also be breathing more rapidly because they are excited about a good hand, instead of being concerned about bluffing a bad hand.

Your eyes also can move more rapidly when you tell fibs and you might reduce eye contact. However, people who have heard about this will tend to stare. They know that their eyes may provide a sign they are lying so they often over-compensate and stare directly at the person asking them a question and do not blink. They think this will make them appear more truthful, but all it does is show the other person that they are trying to conceal a lie.

However, not all of these signals about lying are reliable. And we know it. That’s why we continue to find lying so easy. Study after study of body language “tells” demonstrate that there is little consistency about the “tells”. Someone might scratch their face because they have sensed the blood changes in their skin as they lie, but they also might have an itch for another reason, or they may not be lying but have an itchy nose.

Spotting a liar in the real world is not as easy as we think. Indeed, the polygraph lie-detector has largely been dismissed as pseudo-science, with the National Academies of Science, Engineering and Medicine combining to demonstrate its unreliability.

But we don’t need lie-detectors or body language experts to let us know how to spot lies. We all know from our daily experience that we have lied and mostly got away with it. People are pretty much useless at spotting a lie.

Several studies point to the fact that people tend to be more honest online than they are in the real world. And there is a clear reason for this. If you tell a fib on a blog post or in an email it can easily be spotted. You don’t need body language to detect an online fib. If I were to say that human beings never walked on the moon, you can quickly find out if I am lying with a simple Google search. You might find yourself in the realms of conspiracy theories telling you that the moon landings were fake, but you would be overwhelmed with the amount of data and evidence showing that I had lied to you.

Equally, if you tell a fib in an email, it only takes a quick search to find out you lied. I get people telling me “I never received your email, can you send it again?” Then I check my email tracking to be able to tell them the exact time they opened it and where they were when they did so.

However, people do tell lies online. On Internet dating sites lying is commonplace. However, it is subtle fibbing that cannot easily be spotted. Men, for instance, lie about their height by around one inch. They want to appear taller but know such a lie cannot easily be spotted unless a date carries a ruler around with them…! They cannot lie about other factors, such as their job because they know that can be checked on LinkedIn, for example.

Research at Cornell University has found that online lying tends to happen twice as frequently in the real world as it does when using online technologies.

People might tell small, subtle lies online, but largely they are more truthful than in the real world. The notion of audit trails, searchability and tracking systems mean that people are much more likely to be telling the truth online than face-to-face.

From a business perspective, this means getting people to complete the final steps of negotiations online, rather than in the real world. It also means asking people to submit data online, rather than answering market research questions in the street, for example. Using online technologies as part of your communication helps you reduce the incidence of lies, because we know one thing for sure – people will lie to you every day.

For a real analysis of online lying check out the TED Talk above.